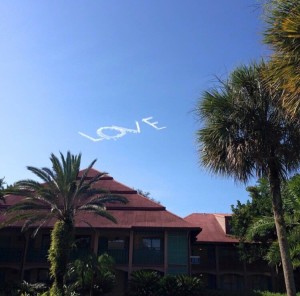 I was in Orlando last weekend for the International Positive Psychology Conference, a convening of some of the best and brightest minds in the world around the science, study and practice of what enables individuals and communities to thrive. As I walked into the sunshine on the first day of the conference, I looked up to the clear powder blue sky, and saw LOVE. Literally, a sky-writer was in the midst of writing the final letter “E” on the word L-O-V-E, the word that brought me to this conference, and in general, to positive psychology. My goal before I leave this planet is to effect mass positive change on Earth, because I am love, I choose love, and I want to perpetuate love -for my fellow human beings, for this abundant and beautiful planet we live on, and for all of the energy beings whose lives are supported by it. I abide by the science of positive psychology as a vehicle for that lofty goal.
And then, within mere minutes of my snapping a picture of LOVE and posting it on instagram, news broke that the Supreme Court had just ruled in favor of legalizing gay marriage nationwide. Here was the majority opinion:
“No longer may this liberty be denied. No union is more profound than marriage, for it embodies the highest ideals of love, fidelity, devotion, sacrifice and family. In forming a marital union, two people become something greater thanonce they were.” Reading these words brought tears to my eyes, for the potency of the greatest legal minds in our country had recognizing love on such a broad, human level. The convergence of the words I had just read in the sky minutes before made it all feel like a transcendent spiritual moment, and I felt hopeful, even validated, in recognizing love as our ultimate savior. When we choose love, we eradicate boundaries of color, religion and creed. Werecognize that our basic essence, our most fundamental spirit, is predicated upon exactly that which will allow us to see each other as what we really are: the same, love.
So choose love, choose a marriage of your energy with all energies you come across that is infused with love, and let us all become something greater than once we were.