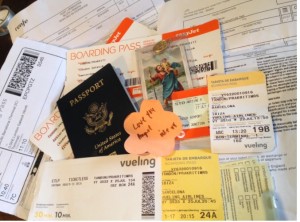 Grant me O Lord a steady hand and watchful eye.
That no one shall be hurt as I pass by.
Thou gavest life, I pray no act of mine
May take away or mar that gift of Thine.
Shelter those, dear Lord, who bear me company,
From the evils of fire and all calamity.
Teach me to use my car for others need;
Nor miss through love of undue speed
The beauty of the world; that thus I may
With joy and courtesy go on my way.
St. Christopher, holy patron of travellers,
Protect me and lead me safely to my destiny.

The whole prayer spoke to me in the midst of so much travel, the handwritten note feeling so personal, but that last sentence flowed through me like a convergence of magical forces, undeniable and forceful. “Protect me and lead me safely to my destiny.” My angel on the plane had urged me to do exactly this, and here was a Divine thunderclap reinforcement of the same. Awe-struck and dazed, I made my way to the next train, no less tired but completely renewed, and found my way back to London and the embrace of my niece who was at home in her flat waiting for me. I fell onto the couch and reveled in the immediacy of what had struck me so clear the last couple of hours: grace is waiting around every corner, if we can just have the faith to perceive and receive it.