The word “sincere” is one of my buzz words lately, put on my radar when I was joined by Syreeta “Sincerely Syreeta” Martin on my most recent Mindfulness Meet Up. It got me thinking a lot about what it means to be “sincere.” I asked her why she chose this moniker, making a strong enough commitment to the word that it has become a permanent fixture of her identity. She explained that if she puts energy into something now, it’s because she wantsto. It’s a simple idea, but think about that. We invest so much of our energy in things we think we should engage with, even when we know deep down they don’t make us happy. Like choosing a career because your parents want you to, or because it’ll impress people. What if we only expended energy on the things we were really attuned to? We’d be happier, more successful people. You wouldn’t spend the rest of your life with someone you couldn’t be yourself around, right? You’d drain all of your energy and resources trying to be someone or something else, leaving little room for your authentic self to have expression. Being your true self, in all of life’s contexts, works the same way. 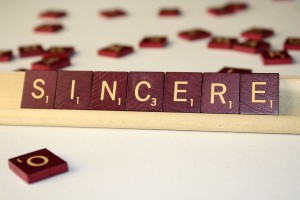 Don’t get it twisted-this kind of sincerity is neither easy, nor always accepted. It takes courage, because you’re telling the world you abide by sincerity, truth, authenticity, basically “keeping it real.” In a world full of ersatz and saccharine, the most manufactured media posing as “reality TV,” plastic surgery and procedures passing for genetic perfection, airbrushed covers and autotuned voices giving us impossible standards of comparison, real is ever elusive and ever harder to fight for. Syreeta has made the commitment to try, and it’s making it that much more obvious to me how very few folks really do, especially in the media world. We spoke about sincerity in Journalism, a field in which we’ve both worked and trained, and we both acknowledged how tricky it can be to fight for the good, the authentic and the real, when there’s so much demand for the manufactured. I went to a party recently, a media-heavy event with local celebrities, beautiful people, and folks I consider friends. Almost as soon as I stepped inside, I felt caged-in and disillusioned. There was a coldness throughout, a superficial level of interaction among the guests, including from those I consider friends who now acted almost as strangers. The air was so thick with airs. It was like everyone was covered with an ego-blanket. I crave warmth and depth of conversation and connection, and this was the opposite. I just wanted to leave. I was tempted to run, separate myself from that which made me uncomfortable, and go back home to my man (as real as they get). But I had been honored that night, and owed the experience my presence. It was a heavy weight on my shoulders to stay and interact in the way I wanted others’ to be, but I knew that was part of my purpose in being represented there. Gandhi said, “be the change you wish to see.” 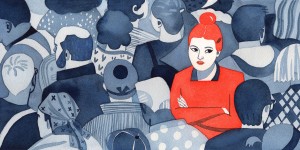 Instead of wishing for your world to be better or different, become such a force for that change, such a strong advocate, that your world begins to change around you. In this context, it took all the energy I had to try to connect on deeper levels, but I fought for it, asking an attendee of one of my meet ups whether she was meditating regularly, asking a friend how her business was going and what her heart was telling her around it, prioritizing people over pictures by conversing with folks that wanted to talk even as I was losing important press opportunities. I was intent on finding the inner beauty and uncovering it even as the emphasis fought hard to be the superficial beauty surrounding me. I can’t say the ego blanket changed to a humility blanket, but I did my part to become the change, to be me even in a context that wanted little me, not big ME.
One small ripple can create a wave, so get out there and fight for something deeper, something higher, something more authentic or real. It’s in the contexts that it’s the hardest to do so that it’s the most important to Be the change, Be better, Be love.